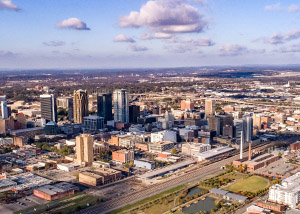 The HERO Small Business Relief Fund created by Harbert Management Corp. and its employees has awarded more than $1 million to small businesses in the Birmingham area.

The fund, launched in April in response to the challenges facing local businesses due to Covid-19, received more than 330 applications and was able to fund approximately 20% of applicants with an average grant size of $16,000.

The internal charitable foundation for HMC, called the Harbert Employees Reaching Out Foundation, provided more than $1 million for the fund with a goal of providing rapid-response grants to small businesses that would give them capital to continue operations and services in greater Birmingham.

“With the diligent work of approximately 25 HMC colleagues, we were able to quickly but thoroughly evaluate the large number of applications we received,” said John Harbert, who has led the HSBRF initiative.

The recipient businesses represented 27 different Birmingham neighborhoods or suburbs, and a diverse group of industries.

“Our whole firm is grateful to be in a position to help out and proud to have responded so quickly, with over $1 million dispersed in under five weeks. We knew the need was both acute and immediate and we worked to address it as swiftly as possible,” said Harbert.

Additionally, Matt Hottle and Mickey Millsap of Redhawk Advisory – who worked with Harbert to launch the Alabama Futures Fund – provided assistance during the process. As did Kinetic Communications, which helped launch the website for the fund.

The HERO Foundation was formed in 1998 by the employees of HMC and its affiliated companies to provide direct financial assistance to individuals or families in crisis due to a natural disaster, medical condition or temporary financial hardship.

Click Here for the full article from the BBJ.